I’ve been using NFS for connecting to my storage for years. Mostly this has been on the desktop but recently I got a laptop and of course it had to have Linux (Fedora + GNOME). I quickly realized that using NFS was going to be problematic because of the nature of the mounting.

So I tried using GVFS, which is the GNOME solution to this. 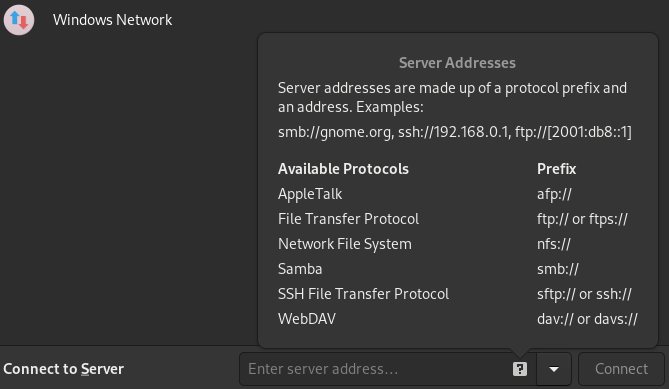 GNOME will mount a wide variety of filesystems as GVFS

Finally after looking and looking I found a solution, systemd.automount.

Lets explain a few of the options:

How it works: instead of enabling and starting the actual mount, you enable the automount. The automount sits and waits for anything to access the directory where it’s configured to mount. Once something tries to access that directory it will start the mount. If the mount takes longer than 2 seconds, it’s considered failed. After three attempts, a total of 6 seconds, a error is returned when the .mount unit fails. I also configured it to proactively unmount after 1.5 minutes.

Why use those options? Without limiting the mount duration and timeouts, you may be left with the desktop or file browser hanging while its trying this mount in the background. I wanted it to try, quickly, a few times – if its not going to work in 3x over 6 seconds then its probably not going to work at all. Then bail out for this session. Subsequent attempts to access the same directory will start the process over again, but the goal is failing quickly instead of hanging. And I feel that proactively unmounting quickly will avoid issues on startup/shutdown and suspend/resume. There are still cases where you could hang on resume if the mount was active on suspend and is no longer responding. With making the window as small as I can, I’m hoping to avoid this.

About spmfox
Just a systems administrator trying to unbreak things.